Absinthe, Argentina, and a Helping Hand 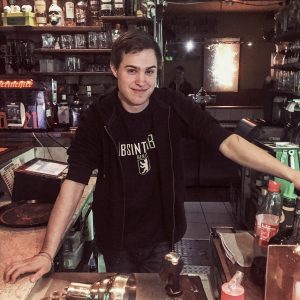 “My life is about traveling,” Jesper Wolfsteller says as he stands confined behind the counter serving absinthe, a bitter, green liquor, to customers at the bar in Berlin where he works.

“I started when I was thirteen traveling on my own,” he says, “and since then like every year at least once.”

A college student hailing from Hamburg, Germany, Jesper currently studies at a university in Berlin. He and his buddies discovered the bar he now works for when they were newcomers to Germany’s capital looking for a weekly hangout.

They didn’t have to try hard. They settled on the second bar they stumbled upon, subsequently starting a Tuesday night tradition for half a year.

Eventually, Jesper’s loyalty caught the attention of the owner. “One night I was sitting in the corner over there, kind of drunk already,” Jesper reminisces with a lighthearted laugh. “And the boss came to me, and he was asking, ‘Hey Jesper, do you want to work here?’”

After replying in the affirmative, the owner put Jesper on the other side of the bar, which is where our paths crossed.

Following high school, Jesper traveled to Argentina to volunteer with Projects Abroad. With only eight private Spanish lessons under his belt, he hit the ground running, living with a host family in which the mother only spoke Spanish. During his six-month stay he taught English, coached field hockey, and helped rebuild an orphanage that was destroyed in a fire.

The country captivated him so much that after his initial stay he later returned for four more months. And he even has dreams of returning to Argentina after college.

“Everybody has to spend at least half a year in another country and [with a] host family and be open-minded to like get it,” he says, stating that more people embarking on cross-cultural experiences would help make the world a better place. “When you learn different cultures you learn to accept them. Then, your own view of something else changes.”

It is obvious that Jesper’s time abroad has expanded his worldview and helped him identify more with the hundreds of thousands of refugees that have flooded into his homeland in the past few years.

“We have a lot of guys still here in Germany who have never been somewhere else, and because right now with the refugees and so on, some are getting … angry,” he says. “But if they would spend at least half a year in another country and just try to get why they live like this … how hard it is sometimes, then you really could learn a lot.”

Though aware of some of the dangers of welcoming refugees, Jesper seems to keep an open heart.

“Yes, of course sometimes you hear bad things about the refugees, that … they steal, they burn their own refugee camps or whatever,” he says, confirming, “Yes, this happens.”

“But, I mean, in their country they have war … I mean, you can’t stay there. They don’t even have houses anymore.”

Given the scope of the current world refugee crisis and recognizing that his country may not be able to continue welcoming large numbers of refugees indefinitely, Jesper thinks they should extend a helping hand as long as possible.

“As long as we can I would say just get them here and try [to do] whatever we can do,” he says.