From growing up in a small town where entering the world of fashion wasn’t even on her radar screen to becoming a fashion designer in one of the largest cities in the world, Canadian-born Megan Mummery is living proof that dreams can come true—even dreams you didn’t even know you had! With her OhSevenDays women’s wear brand, Megan seeks to make unique everyday staple wear that is as fashionable as fast fashion, while being ethically sourced and made. Listen as she shares her cosmopolitan journey of professional and self-discovery.

Cemre (Gem-ray), a child psychologist in Istanbul, writes children’s books that help children process big issues with their families. Listen as she explains how one of these books came to be and how she uses it to engage with children in their world—a world in which she herself delights.

In the middle of the ongoing Syrian War, Esra, a Syrian national from Kuwait, and her father founded a small orphanage in Istanbul, Turkey, where she is helping oversee and care for a group of high-potential, yet vulnerable Syrian children. Esra credits her father with inspiring and motivating her to do good even when it goes against others’ expectations and to be a source of change in the world. He also encouraged her, she says, to set the standard for attitude and behavior rather than simply letting her thoughts, attitudes, and actions be dictated by her surroundings. In her father’s words, she was taught to “be a thermostat, not a thermometer.” Listen as Esra recounts the endeavor this father-daughter duo began on behalf of their family and other Arabs worldwide who want to make a difference in the lives of those affected by the Syrian crisis.

Editor’s Note: The subject’s name in this week’s story has been changed to protect her identity.

Nuray (nur-eye), an accomplished teacher who runs her own language school in Istanbul, has been teaching the Turkish language to foreigners for over a decade. Although an experienced educator, Nuray still considers herself a student of sorts who is consistently learning something new from her diverse pupils who have taught her everything from basic cultural lessons to different parenting techniques. Some of these lessons arose from cultural mishaps that still make her laugh to this day. Listen as Nuray shares the joys and challenges of cross-cultural education and how the “yabancilar” (ya-bon-ja-lar), or foreigners, help bring the great, big world a little closer to her heart and home.

Breakfast in Morocco, Dinner in Istanbul

A sojourn in the artsy Moroccan town of Asilah inspired Asmae (as-ma), of Ouazzane (Wazan), Morocco, to become an artist in her own right. A lover of travel and speaker of five languages, she then moved from her native country to the cosmopolitan metropolis of Istanbul, Turkey, and encourages everyone to travel so they can experience different cultures firsthand.

In the Presence of My Enemies

In some small towns, having long hair can be dangerous business. Such is the story of Ufuk (u-FOOK), a thirtysomething from Istanbul, who had long hair and earrings as a university student in a one-restaurant town far away from home. Listen how he overcame prejudice and violence with a combination of a strong spirit, a desire to change the world, and the help of some unlikely allies … some former Turkish gangsters.

As one of the world’s most populous cities, Istanbul boasts more than its share of human residents. But this famed historic city also boasts its share of another kind of resident: the fluffy, furry kind. The many cats and dogs of Istanbul’s streets have nuzzled their way into the hearts of many of the city’s residents, who at large have welcomed their fellow city-dwellers, who serve as one of the reasons why people generally fall in love with Istanbul. Common citizens and shop owners alike tenderly care for these street animals, who in return grant the people their faithful companionship. In this week’s podcast, allow Hale, a native of Istanbul, to take you on a virtual walk down an Istanbul street where you yourself can see what all the bark is about.

Turning a New Leaf Over

For some, cross-stitch may conjure up images of sewing circles in the olden days or of simple patterns stitched using five shades of the same color. Elif (pronounced “a-leaf”), a native of Turkey, is seeking to challenge that traditional image of stitching by creating pieces that appeal to younger generations. While comfortable being a self-proclaimed ‘old-soul’, through her artwork Elif is serving as an advocate and agent for the evolution art must take to captivate and express each unique culture and generation.

Ever had a good idea? A really good one? Some ideas may seem good at first but lead to disastrous results. We’ve all had those ‘it seemed like a good idea at the time’ moments.  But then again, some ideas actually blossom into action and success.  Such was Hatice’s idea.

Far From Home – A Story From a Syrian Refugee

In light of the Syrian refugee crisis, this story was written about one of millions of families forced to flee Syria due to the ongoing civil war. In an effort to protect their family, Abier and Mohanet, along with their 4-year-old son, Assad, fled from northern Syria in August 2013.

A Modern Girl in Istanbul 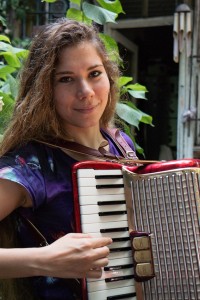 An interview about Turkish culture in Istanbul told by Canan, a masters student in Developmental Psychology at Boğaziçi Üniversitesi here in Istanbul. Canan describes herself as having a “child’s soul,” in relation to her love of musical theater. Canan is an only child who comes from a modern Turkish family; a family who is educated and values education. Her father is an architect, and her mother is an English teacher, both of whom support her love for the arts. Our hope for our listeners is that you get insight from Canan’s perspective about the “complex, heterogeneous, colorful” culture of Istanbul. You will hear Canan compare Istanbul to Anatolia throughout the interview. Anatolia is the majority portion of the the Republic of Turkey often referred to as Asia Minor. The city of Istanbul is divided by the Bosphorus Strait. The Western side of the city lies in Europe, while the Eastern part of the city, along with the majority of Turkey, lies in Asia. 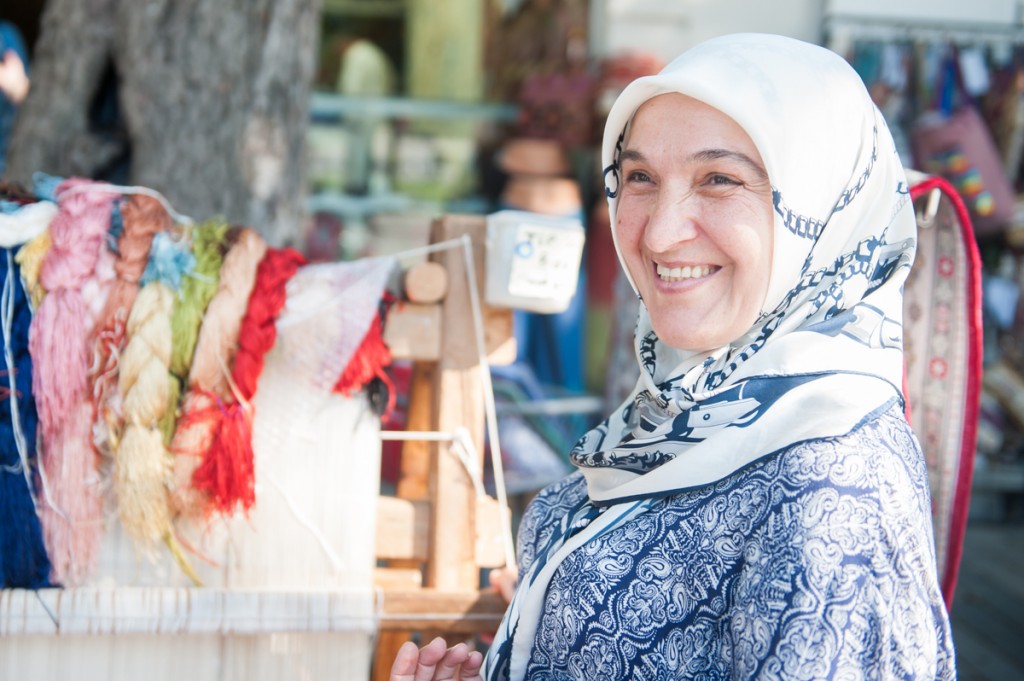 This is a photo story about Emine. She is an adorable Turkish lady that has been weaving  hand made Turkish carpets in front of Turkey’s famous Blue Mosque for years.

Closer to the People

If you are planning a vacation to Istanbul anytime in the near future, there is a good chance you might cross paths with a 28 year old Turkish man who manages a spice shop in Istanbul’s famous spice bazaar. His name is Mendo, and he has managed Helal Baharat Spice Center at the Spice Bazaar for nearly five years now. 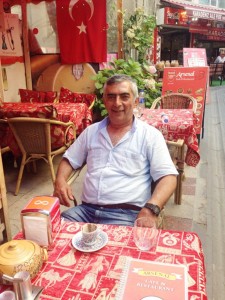 Turks are continually proving to be warm and hospitable people. Recently Abdullah sat down and shared his story with us on the patio of the Arsenal Hotel and Cafe & Restaurant which he owns along with his son and brother. With his 25 year old son beside him, He spoke about growing up in a village in central Turkey, moving to Istanbul, his construction days, work in Russia, business ventures, marriage, and his family. He spoke about happy times, sad times, regrets, successes, respect, love, and hard work. What came out over the hour and a half were treasures in the form of spoken memories and old creased photographs.

Meet two talented sisters giving a fresh face to professional women in Turkey. I got to have tea with Odul and Gülçin out on their office patio on a sunny day in Istanbul. These two whirled around balancing our chat, client phone calls, and employee questions like it was all in a days work.